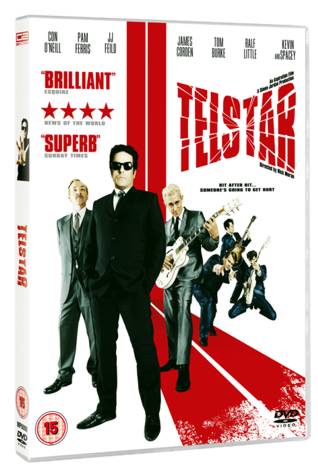 Written and directed by Nick Moran (Lock Stock and Two Smoking Barrels) and featuring the impressive line up of Con O Neill (The Last Seduction), Kevin Spacey (American Beauty), Ralf Little (The Royale Family), James Corden (Gavin and Stacey), Pam Ferris (The Darling Buds of May) and JJ Field (Northanger Abby) TELSTAR is the true story of legendary record producer and maverick musical genius Joe Meek, creator of a string of #1 hits in the early 60’s

Set against a backdrop of early 60’s London, TELSTAR is the story of the world’s first independent record producer, Joe Meek. A maverick genius who enjoyed phenomenal early success with TELSTAR – the biggest selling record of its time – before bad luck, depression, heartbreak and paranoia forced him into murder and suicide. A gay, amphetamine addicted, talented but deeply troubled soul, Meek dabbled in the occult. He is already an iconic figure in the world of British pop. Far from being a maudlin tale, this stranger than fiction true story is a satirical comic drama revealing the many sides of Joe Meek, a man who is now revered as a pioneer in the field of popular music

The eclectic cast is joined by a host of musicians including ex-Libertine Carl Barât and front-man of The Darkness, Justin Hawkins. Sixties rockers Clem Cattini, Jess Conrad, John Leyton and Chas Hodges who recorded with Meek, also appear in cameo roles

Special Features Telstar: An Inside Look